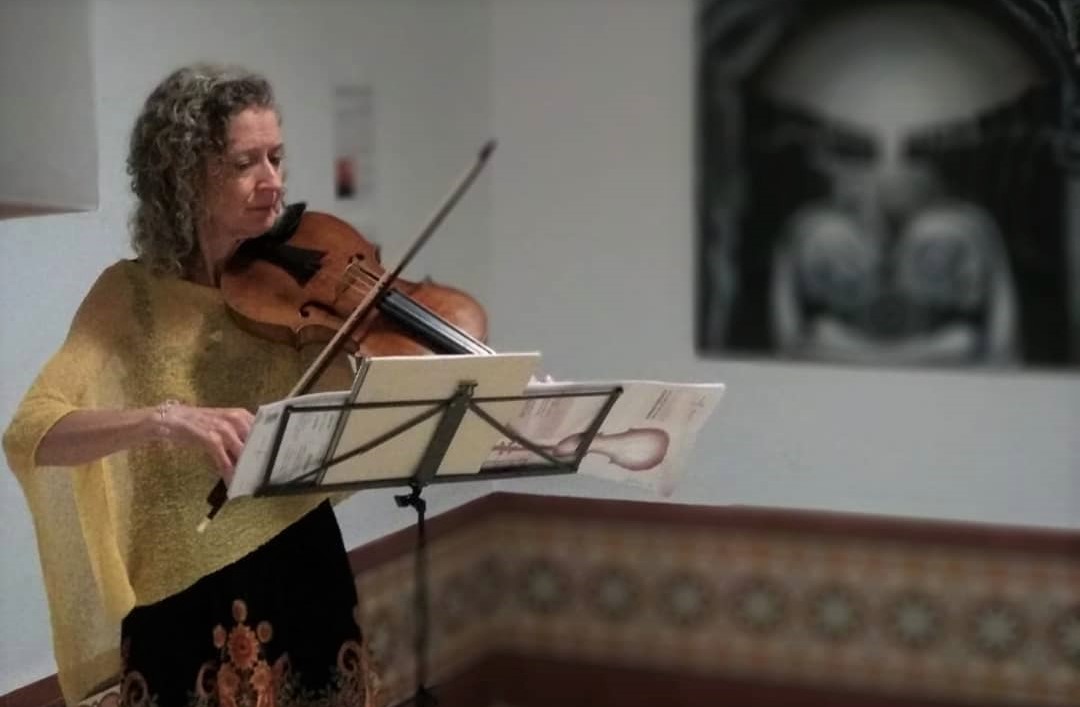 What is it about strings that causes an orchestra to have multiples of them compared to winds and brass?” This is a question I’ve asked myself since childhood when I saw the St. Paul Chamber Orchestra for the first time. I recently played an early baroque composition where the two violins imitate trumpets going back-and-forth, with fanfares and calls to battle, as well as expressing softer sentiments of the heart;  bravery, bravado, vulnerability, homesickness all expressed fully. As I played and listened to the piece, I was struck by the versatility of expression of the violin! This carries over to the viola as well. We can portray earthquakes one second and the deepest grief, romance, trite sentimentality or silly antics: one expression a stroke away from the next! The baroque period had a phrase for this: ‘Capriccio Stravagante’ made popular by several compositions with this title. In my classical selections on August 22 for AIRGENTUM’s Exhibition we explore the whimsical exploitation of these attributes of the strings.

Marin Marais’ ‘Folias’ variations set to the famous Flamenco melody that became the rage all over Europe in the 17th and 18th centuries. Think of this: there is only the present moment. Even if you have heard  these pieces before, audiences and performers create them together over a span of time and the experience of baroque gems such as this ‘ Folias’ as well as J. S. Bach’s Cello Suite in E flat are made more vibrant, and strike deeper chords in our minds with repetition, as we advance in our experience of life. Together, as a family of performers and audience members, we nourish each other with new and revisited performances.

To answer the question: We aren’t made of metal or wood or reed, but we do have guts and hair. As the flesh of our fingers and the bow hair meets the gut strings, our outsides and insides are brought together! Played and heard through the heart our beings merge with the sounds without resistance or seeming separation. We are thus carried by the music into the ‘Capriccio Stravagante’ of our imaginations!

I am here at AIRGENTUM to explore the creative process of my life, the ‘creative-spiritual life’ as my movement teacher, mentor and friend, Beatrice Lees, named it for me many years ago. I discovered this is an act of love toward the self which has value as one is able to share this love with her world in present time. Here is a text that inspired me to go forward in this quest:

“To love does not mean to surrender, dissolve, and merge with another person. It is the noble opportunity for an individual to ripen, to become something in and of herself. To become a world in response to another is a great immodest challenge that has sought her out and called her forth.”

Related to this idea are the symbolic threads that weave themselves through an individual’s unfolding process. Thomas Troward in A Hidden Power says:

“Life itself is to be realized only by the conscious experience of its livingness in ourselves, and it is the endeavor to translate these experiences into terms which shall suggest a corresponding idea to others that gives rise to all symbolism.”

What Is exhibited and performed here is an exploration of the personal unfolding life processes of healing and creativity during these two months in AIRGENTUM’s residency as felt and revealed to me by means of personal relationships and the symbols of circles, land, body, voice and sound as I read and studied with masters in several areas.  Here is how this residency came about:

In January 2017 I got the message that I needed to live my creative-spiritual life. Not sure what that might be expressed and apparently bringing up all the reasons that it wasn’t going to happen. But consciously I was for this idea. In April an old friend invited me to an invitation only creative camp near San Francisco called, The Soup, and I felt it was the start I had asked for even though it took me quite awhile to say yes. It was fun but wasn’t what my soul yearned for so I kept an open mind and kept studying the principles that I could find in living in harmony with spiritual law. Then in November I got the idea that I wanted to explore my creative urge for artistry in movement, sound and color because up till then I would offer/show what inspired idea I had in sound and movement to an artist, dancer, choreographer sculptor, etc and they would use it.  I got the idea to do group multi-arts/mix media with communities using the sounds of their environment, their words/language so that the result was a participatory creative, collective experience for those people interested rather than simply passive (Anna Halprin and others have done things somewhat similar.)

Throughout the winter into spring I was inspired to draw with crayons almost daily so instead of coming straight here, I made an arrangement to go to England to visit Meriel Hoare, an English artist who has taught her brilliant ‘Drawn Home’ workshops around the world. I had last attended one of these workshops eight years ago, where we did a very interesting collaboration with sound, movement and modeling. She suggested that I bring an entire set of soft pastels and just start playing with color using water, my fingers, etc. After that my goal was to put color on paper every day. Also, I brought some really great books I’ve been wanting to read for years but never had time to focus on.

Once I got here I realized that I wanted to put color on paper without judgement or repression!

And upon arrival I also realized that before doing anything with local people I needed to understand and have personal experience in the Andalusian (Flamenco) arts and Sephardic music: in short the ‘ ‘sense’ of the people here… So those are the things I have set about to do. Studying the music was first but it took awhile to locate a teacher. Martina introduced me to a fantastic teacher, Israel Martin, at Asociación Cultural Flamenca AYAY in Sevilla. While attending his wonderful flamenco recitals at Casala Teatro in Triana I met a wonderful dance instructor as well! Meanwhile I found Marin Marais’ “Couplets de Folies” written in 1701 on line and revisited this piece for tonight’s Exhibition as well as learning the Bach 4th Suite in E flat Major for solo cello, a piece which immediately came to mind upon arrival in Castilblanco.